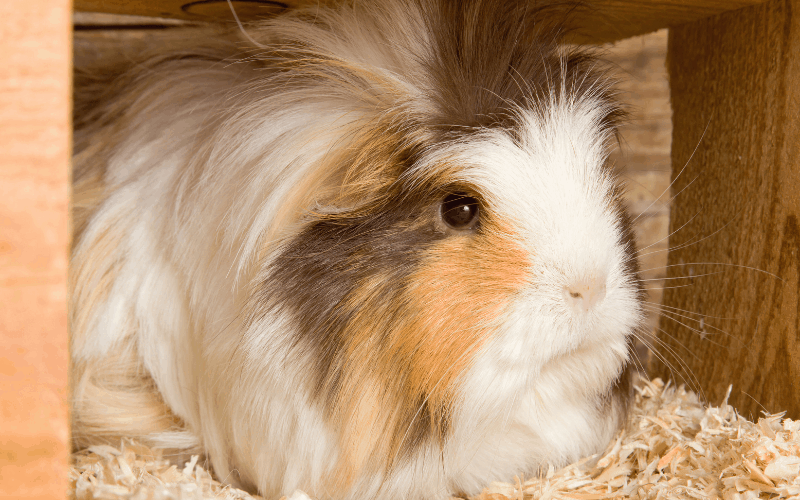 Guinea pigs have fully functional eyes that are bright and clear. But their eyes are very different compared to that of humans, they slightly protrude and have very poor vision compared to ours.

They cannot see an object placed at long distances and can only see objects close to it. But do guinea pigs blink? Do they have eyelids? Yes, guinea pigs do blink when necessary, they also have eyelids they use to keep out dust and dirt.

In today’s article, we will discuss everything you need to know about guinea pig’s eyesight as well as how often guinea pigs blink.

How Often Do Guinea Pigs Blink?

It’s okay to not know that guinea pigs do blink, as they don’t do it often. In fact, guinea pigs are known to sleep with their eyes wide open, this is what makes many people wonder if guinea pigs can blink.

However, guinea pigs only blink when it is particularly necessary, either due to dry weather conditions, or foreign objects or debris getting into their eyes.

Guinea pigs are prey animals who are at the bottom of the food chain in nature, so their ability to go with their activities without having to blink or close their eyes frequently serves as a survival tactic.

This enables them to stay alert at all times because although blinking doesn’t really take much time, it is still quite dangerous for guinea pigs to blink especially in the wild.

Guinea pigs have a well-developed oculomotor system, which helps to regulate eye movement and their blinking behavior. This system enables guinea pigs to suppress their blinking when they are in dangerous situations or when it may be disruptive to their vision.

However, you may find that domesticated guinea pigs, especially when they feel comfortable and safe, are more likely to blink more often than those in the wild.

But if you happen to notice your guinea pig blinking a lot it could be a sign of an infection, especially when there’s the presence of other symptoms like swollen or red eyes.

Due to guinea pig’s developed oculomotor system, they can also blink with only one eye. So If they have something wrong with just one of their eyes, they will only blink on the eye with the problem while the other eye remains open.

Why Your Guinea Pigs Might Be Blinking A Lot? A guinea pig blinking a lot could be due to something in their eyes, such as dust or debris from either their bedding or hay.

So, they blink to clean their eyes. Due to the location of their eyes which are quite low to the ground compared to other animals, it is very easy for dust to get into their eyes.

So If your guinea pig starts to blink excessively, you may need to have a closer examination and to check to see if you tell the cause of it.

If the excessive blinking continues, you should take your guinea pig to see a vet as eye problems for guinea pigs are quite fatal.

One of the symptoms of an eye infection includes frequent blinking, keeping their eyes close, redness, tearing up, swelling, scratching at their eyes, or inflammation or discharge from the eye.

Guinea pigs can suffer from eye problems such as corneal ulcers, overgrown teeth, and tumors.

One way to care for a guinea pig experiencing eye problem is by ensuring that their cage is kept clean at all times, you also need to separate the infected guinea pig from others (if you have more than one guinea pig) incase the infection happens to be contagious.

If after carrying out treatments for a couple of days and the symptoms don’t seem to clear up or begin to worsen, you should immediately visit your vet with your guinea pig.

Do Guinea Pigs Have Eye Lids?

This is a common question and the “not-so-shocking” answer is Yes, guinea pigs do have eyelids. But it might not be the easiest thing to notice because guinea pigs rarely close their eyes completely. This makes it hard to tell if they have eyelids or not, but they actually do.

You may also find it hard to notice their eyelids because not only do guinea pig rarely close their eyes they also blink very fast. In fact, according to one scientific study, it was determined that guinea pigs blink much faster than humans or rabbits.

So, it’s not surprising that it’s hard to notice when they close their eyes and even tell if they have eyelids. Because guinea pigs tend to sleep with their eyes open, you may think that they rarely sleep, but that isn’t true.

Guinea pigs sleep in short bursts and usually spend the majority of their day resting instead of sleeping as they are prey animals.

Guinea pigs can sleep for up to 5 hours per day but it is usually in short bursts that are no longer than 10 minutes, the rest of the day is spent resting. Resting enables them to keep an eye out for any predators in the wild.

Being at the bottom of the food chain in the wild and years of evolution has helped guinea pigs to develop an extraordinary oculomotor system that allows them to control their eye movements even while they sleep.

Although domesticated guinea pigs are usually more relaxed with little or no fear of predators, they are already genetically inclined to sleep with their eyes fully or partially open.

So If you happen to notice your pet lying still in its cage while its eyes are open, making him look like he is gazing into the distance, your guinea pig is probably resting or taking a nap.

Even though this is a common occurrence in guinea pigs, it is not always so. You may notice your pet sleeping with its eyes closed sometimes, this indicates That they feel comfortable and safe.

This may become a norm if your guinea pig is happy with its living environment and has bonded with you and built trust for you as well.

Having cage mates also helps guinea pigs to feel safe, they are social animals and will often sleep together and cuddle, this helps to make them feel safer than when they sleep alone.

The Strength Of Guinea Pig’s Eyesight

Being prey animals, Guinea pigs are always at alert and on the lookout for predators. The same reason why their eyes are kept open most of the time.

Guinea pigs have unique eyesight, which combines with the facial structure that enables them to see about 340 degrees around them without having to move their eyes. Guinea pigs can basically see everything that goes on around them.

Aside from having a 340-degree range of vision, guinea pigs don’t really have the best eyesight. They don’t have depth perception and this limits their eyesight.

They also have shortsightedness and can only see objects close to them. Guinea pigs also don’t really have detailed eyesight.

It has been estimated that guinea pigs can only see objects within a one-meter range from them. Once an object goes Beyond this range, they find it hard to see the object clearly. They tend to rely on their sense of smell and sound to stay alert to any change in their environment.

Guinea pigs also have a very good memory that enables them to navigate around in the wild. They can learn and remember the location of food sources and tunnels. This is why obstacle courses are a fun game to engage your guinea pig in.

Guinea pigs are not colorblind and can, in fact, see color. Several studies have determined that guinea pigs have dichromatic color vision which means that they are able to see colors, not just as clearly as humans.

However, the colors guinea pigs are able to see has not been clearly determined yet. One study carried out claimed that guinea pigs can recognize the green color.

Another study claimed that the favorite color of a guinea pig is actually yellow. Some scientists even believe that guinea pigs have better color vision compared to most other animals.

With no scientific study with any substantial proof, we can not accurately tell what colors a guinea pig can see.

Do Guinea Pigs Have Night Vision?

Guinea pigs are crepuscular which means that they are particularly nocturnal and diurnal, this makes a lot of people presume that guinea pigs have some sort of night vision. This is also an ability that many rodents have in common.

It’s no surprise that you may wonder do guinea pigs blink? They are known to sleep with their eyes open and blink very quickly, thereby making it difficult for them to be seen blinking.

How To Train A Guinea Pig To Follow You