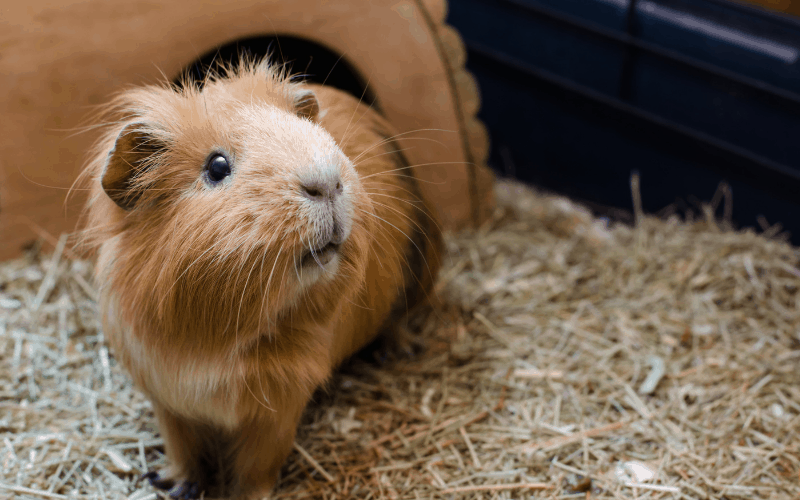 Guinea pigs are part of the rodent family, and they express a wide range of emotions using sounds, one of which is squeaking. Understanding all the sounds and their indications is very necessary in order for you to be able to rightly communicate with your pet. So let’s learn why do guinea pigs squeak!

But do guinea pigs squeak when hungry? Yes, but squeaking can also be used by your guinea pig to express other emotions, so hunger shouldn’t be the only thing associated with a guinea pig’s squeaking.

In this article, we’ll take a look at the different reasons why your guinea pigs might be squeaking and other different sounds they make.

Do Guinea Pigs Squeak When Hungry?

Like I said earlier, Yes, guinea pigs do squeak when they are hungry, but there are many other things that can make your pig squeak apart from being hungry.

Let’s discuss some of these things below.

This is one of the main reasons for guinea pigs squeaking. So if you hear your guinea pig squeaking, you should definitely provide it some hay/pellets or fresh fruits and veggies.

Squeaking for food is one of the most common interactions guinea pigs have with their humans.

Guinea pigs are prey animals, so they are very sensitive to changes in their environment like a loud bang, and this can cause them to squeal in order to alert your other guinea pigs of what it thinks is dangerous.

Not only can Squealing be an indication of terror or anxiety in guinea pigs, but it can also indicate pain. Guinea pigs also squeal when they’re experiencing pain, either due to injury or illness.

If you notice that your guinea pig’s squeaking might be due to pain, you should take him for a vet checkup immediately.

Yes, guinea pigs are social animals, and they can have an attention-seeking behavior where they squeak incessantly.

So if your guinea pig won’t stop squealing, he might just want your company and attention. You can try petting him for a couple of minutes or play with him.

Your guinea pig can start Squeaking when they feel trapped and confused, causing it discomfort. A situation this can occur is at his annual veterinary appointment when the vet tries to keep him still because everything might be new for your guinea pig.

5. Communicating with other guinea pigs

So, If you have a young guinea pig that has a strong bond with another guinea pig who isn’t his mom, he may try to use squeaking to look for him too.

Happiness is another reason why your guinea pig is Squealing. If, when you walk into a room, your guinea pig squeaks, it means that he likes you and probably missed you if you have been out for a couple of hours.

Guinea pigs do not only communicate by squeaking; they have other sounds they make to express a wide range of emotions.

Guinea pigs make a wheeking noise is made just for you when they’re hungry or want food. Your guinea pig can even make this a routine and try to make this noise around mealtimes.

This is especially if they are fed at around the same time every day or if they see you bringing their food. This wheeling sound is used to express excitement or hunger.

Guinea pigs also make cat-like noises similar to the purring of a cat, but this noise may sound a bit more like a grumble.

Guinea pigs use this sound to express happiness or contentedness, and it’s often heard when you’re carrying out bonding activities with your pet, like grooming or petting them.

Guinea pigs also sometimes make this noise in short spurts when they are startled or threatened; this helps as a way of soothing themselves.

This is a noise made when the guinea pig is in distress, and although it may look cute to you, it isn’t for your guinea pig. When your guinea pig starts growling, it means it feels threatened by something that’s nearby.

Try changing the space around them, reduce the movement in the room, or turn of the tv or any other source of loud noises nearby. Then try to cuddle your pig and give them a pat so they can calm down.

This noise is a rapid succession of quick squeaks. Guinea pigs make this noise when they are angry or when they are feeling unhappy or agitated about something that’s going on.

This noise shouldn’t be overlooked as it indicates that your pet is in pain or in danger. If you have more than one guinea pig, it may indicate a fight or dispute between your pets, and you should try dissolving the incident immediately.

When a guinea pig is troubled or distraught, it will make a very high-pitched moan. When you hear this, do not panic; just try to check on your pet to make sure they’re ok.

This noise sounds as it is spelled, and it is only made by some guinea pigs. This sound isn’t restricted to A breed, and It’s thought to be more of a personality thing for guinea pigs.

Your guinea pig can also make a chutting sound when your guinea pig is relaxed, happy, or content. This is a very rare noise for guinea pigs to make, so if your pet does it, you should be happy.

And That Is Why Do Guinea Pigs Squeak

Guinea pigs communicate with humans using different sounds, and knowing how to interpret each sound will enable you to interact and care for your guinea pig better. So, do guinea pigs squeak when hungry?

The answer is yes! But squeaking can be used to express a whole lot of emotions aside from hunger, and you should probably investigate your guinea pig properly before determining a cause.

Do Guinea Pigs Know Their Name?