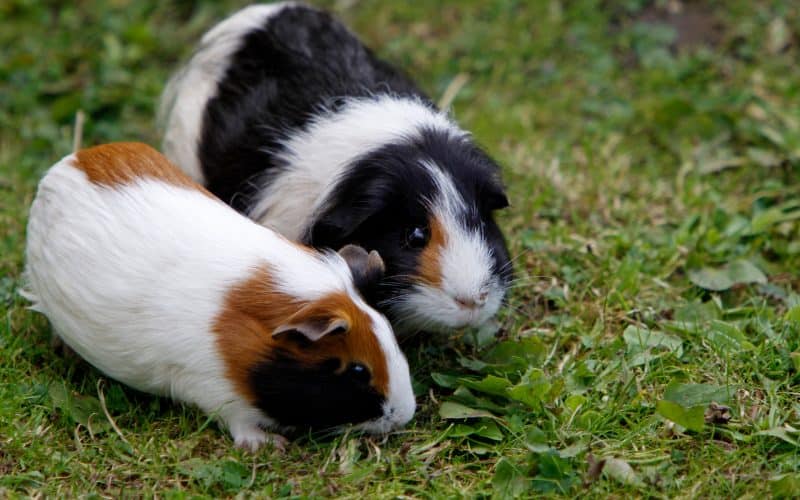 Rearing domestic pets is fun and somewhat stressful to some extent. You need to be very careful to choose what your pet eats.

Undoubtedly, pets need good food to be healthy (just as humans), but certain foods can be poisonous for specific pets. Considering that you rear guinea pigs, how much coriander can guinea pigs eat? You can feed your guinea pigs 1 – 2 small bite-size of coriander at most twice per week.

First of all, what is coriander, and what does it contain that makes it a good food for guinea pigs? Well, coriander contains a lot of nutrients that are good for guinea pigs. Here, we are going to analyze this herb (coriander) and its possible side effects when consumed constantly.

Coriander or Cilantro is a nutritious herb confirmed by vets as one of the best foods you can serve your guinea pig(s). Studies show that coriander contains nutrients such as Vitamin C, calcium, and phosphorus – this makes it a healthy herb for not just guinea pigs, but even humans.

Guinea pigs need to consume vitamin C regularly; it is good for their system. In the same way, they need meals that contain a low ratio of calcium phosphate deposits. While coriander obviously contains these nutrients, your guinea pig(s) should not consume it excessively.

How Much Coriander Can Guinea Pigs Eat? Since domestic cavies are not to consume coriander in excess quantities, how much of it should you feed them? Firstly, you shouldn’t feed your domestic cavies with coriander all the time; just as we human love varieties, animals love such treatments too.

According to vets, it is safe to feed your cavy with 1 – 2 small bite-size of coriander at most twice within a 7-day window (one week). That is to say that your guinea pig should not eat coriander more than two times in a week.

The nutrients in coriander are in sufficient quantities, insomuch that a bite of the vegetable is enough to nourish your cavy’s system for a week. Coriander has a strong scent; your cavy may not find it pleasing, and as such, may not eat as much as you wanted. That’s not bad!

More so, you should know that lack of vitamin C can cause your cavy to fall sick. Vitamin C is essential for their system. Coriander contains vitamin C is sufficient quantity, and that’s why your cavy needs it.

What Happens When Guinea Pigs Eat Too Much Coriander?

Even as humans, when we consume certain foods in excess quantities, it does more harm than good to our body system. Similarly, when domestic cavies are forced to eat more coriander than having a proportional diet, they may start to develop certain symptoms and fall sick.

Furthermore, asides from coriander, there are other herbs/foods you can feed your cavy. This includes pallet-based foods, hays, other vitamin c supplements, and fresh vegetables.

Other Foods You Can Feed Guinea Pigs

It is totally safe to feed domestic cavies with hays; hays help to wear down the guinea pig’s teeth that keep growing non-stop. If domestic cavies don’t eat hays, their teeth are likely to overgrow.

There are quite different hays for Guinea pigs. You have to go with your vet’s recommendation. However, the most common hays are Timothy hays and Meadow hays.

Vegetables are among the basic foods you should feed your domestic cavies on a regular basis. It is entirely safe to feed guinea pigs with a cup of vegetables daily. However, you shouldn’t always place them on one vegetable – try to introduce them to new vegetables from time to time.

Notes: wash the veggies before serving to your domestic cavies. Feeding your guinea pig(s) with fresh herbs and vegetables helps to improve their general health. This is because vegetables contain vitamins and minerals deposits required for the growth of guinea pigs.

Guinea pigs should be fed with pellet-based foods (1/8 cup per day for each cavy). However, for newborns (less than six months), or pregnant/nursing domestic cavies, it is recommended to feed them with pallets (some alfalfa) quite frequently than others.

The rich-calcium in alfalfa will help the young or pregnant cavy a lot. While alfalfa helps young domestic cavies in development, it helps the pregnant ones in gaining strength. Also, feed your domestic cavies with varieties and not one specific pallet all the time.

There are other guinea pig pallet foods asides from these very few that we’ve mentioned here. Seek your vet’s approval to feed your pets with the recommended pallet in normal quantities. Always read the instructions on the food package.

Some fruits are good for your cavy’s health. Fruits such as oranges, pears, apples, blueberries, papayas, cucumbers, etc. are deemed healthy for guinea pigs. However, guinea pigs shouldn’t be fed with more fruits than vegetables.

Fruits have higher sugar concentration than vegetables and other types of guinea pigs’ foods; thus, your cavies should be fed with fruits once in a while (weekly or any vet-defined interval). Also, ensure that the fruits to be served are thoroughly washed.

We have curled these safe guinea pigs’ foods from our research; there are other types of food you can feed your pet(s). In all, we strongly recommend that you stick with your vet’s directives when it comes to how you should feed your domestic cavy.

Also, there are certain foods you should not feed your pet because they can be dangerous to its system and cause serious complications.

Foods You Should Not Feed Your Guinea Pigs

There are lots of them, but here’s a shortlist of the few we could verify. These foods are prohibited for guinea pigs because they contain excess fat, sugar, low nutrition deposits, choking deposits, and other unhealthy reasons.

How To Rear Guinea Pigs?

Guinea pigs, also called domestic cavies, are beautiful pets you can rare for different purposes. It is not so expensive to rare and train guinea pigs; however, you should always provide them with food all the time because they do eat a lot.

A male guinea pig is called boar, while a female is referred to as sow. The little ones are piglets, also called piggies. Sows (female guinea pigs) can start reproducing just after five (5) weeks of birth.

However, it is advisable to practice such an early reproduction – allow the sow to get to at least 3 – 4 months old when it must be weighing around 400g.

Also, female guinea pigs’ heat cycle spans sixteen (16) days; during this period, the sow can stick around a boar for up to eight (8) hours.

Can You Eat Guinea Pigs?

Generally, the answer is yes. But, some countries and certain religions forbid the consumption of some animals, which guinea pigs might be among the list. The meat gotten from guinea pigs is poised to have the same taste as rabbits.

If your country or region does not forbid guinea pigs’ consumption, then it is totally safe to eat. However, you should prepare it well, adding all the necessary seasoning.

More so, guinea pigs are used for scientific researches. In fact, cavies are useful in many ways, and even when you keep them as a pet, they are not so expensive to train and feed. The all-around usefulness of cavies is what makes many people consider guinea pig farming/breeding.

Here, we have extensively covered many aspects of rearing and feeding guinea pigs; they are beautiful creatures you would love to see around you almost every hour.

Back to the initial question – how much coriander can guinea pigs eat? Please note that guinea pigs should be fed with varieties of herbs/veggies, fruits, and pallets. Coriander falls about herbs/veggies, and it contains vitamin C, which is essential for guinea pigs.

You must not feed guinea pigs with coriander every day – vets recommend that cavies eat coriander at most thrice in a week, not consecutively. The same applies to other foods (especially fruits). There’s high sugar quantity in fruits; your cavies don’t need excess sugar; so, feed them fruits occasionally.

The exact serving for coriander (as recommended by most vets) is 1 – 2 small bite-sized pieces. Due to the strong taste/smell of coriander, not all cavies find it pleasing to eat. Most importantly, you should know that coriander is the same as Cilantro. Hence, when people talk about Cilantro, they also mean coriander.

We hope that this article helps your need; kindly share with others.