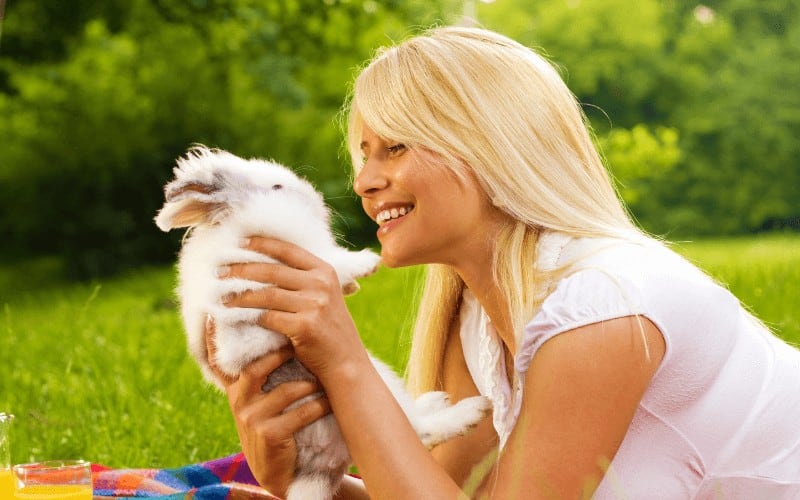 There are many breeds of rabbits that make excellent pets for children or adults who want a low-maintenance companion animal.

In this article, we will discuss some of the most popular rabbit breeds and provide you with tips on how to care for them once they become your new furry family member!

What Is The Friendliest Rabbit Breed?

The friendliest breed of rabbit is the Netherland Dwarf. These rabbits are well known for their friendly personalities and liveliness. They make excellent pets due to their gentle demeanor and curious nature.

Netherland Dwarfs can be found in a variety of colors, including blue, white, black, brown, red-eyed white, and red-eyed black.

If you are looking for a pet that will always be there with a lick on your hand or an ear nudge when you need it most, then this might just be the rabbit for you!

The friendliest rabbit breeds are those that enjoy human contact and attention. Rabbits of this type will often hop on a lap or come over for petting when they see the owner approaching.

There are many breeds with these qualities, but here is a list of some of the most popular ones:

Suppose you’re not so sure about rabbits as pets but still want one around because they have been declared “the third most popular pet in America” by The Humane Society of the United States. In that case, the perfect breed for you is probably a Holland Lop.

These rabbits are small and easy to handle, making them great companions for kids who want their own living teddy bear!

Holland Lops also come in many colors, including black, brown, blue-eyed white, chocolate, and lilac. This color variety means you can find the perfect pet to match your home’s décor.

The Dwarf Hotot is a small breed of rabbit that originated in France. It was originally bred to be kept as pets and has now spread all over the world.

They are one of the friendliest breeds with many desirable traits like being very tame, intelligent, gentle, clean, and quiet around humans. They also have good appetites for hay, vegetables, and pellets.

It is effortless to care for them as they are not too demanding of their environment but still require a lot of attention from humans.

They can be great pets for households with children who want an animal that will tolerate the noise without being threatened or scared, making them perfect for people who have allergies.

This breed would be great to pick if you are looking for a small, friendly pet and can live in confined spaces.

You may also find a few blue-eyed whites in this breed as well.

Jersey Wooly rabbits are one of the most popular breeds and are recognized for their long, soft fur. Jersey Woolies come in a variety of colors, including black, white, gray, brownish tan, or red.

These bunnies can be found all over the world due to their popularity. They have been bred for many generations to produce a rabbit with the perfect temperament.

Jersey Wooly rabbits are known for their laid-back nature and gentle disposition, making them an ideal pet animal for children, teens, or adults who have allergies.

The American Fuzzy Lop is an excellent breed for first-time rabbit owners because these little guys are so friendly and cuddly!

This breed has short, soft fur, making them the perfect pet to snuggle with on cold nights. The American Fuzzy Lop also has short, thick ears, making them look like they are always happy.

New Zealand is a lovable breed of rabbit, and their coats come in colors like black, blue-eyed white, chocolate brown, and red-eyed black.

This fun creature has tons of personality, which makes them great for new pet owners! They are very playful animals that will keep you entertained.

The Lionhead is one of the friendliest rabbit breeds because they love to be held and cuddled. They require a bit more attention than other rabbits, so it’s best if you’re home for most of the day.

The Lionheads are comparatively small but have big personalities that make them excellent pets for people who live in apartments or have little free time.

Additionally, they are excellent with kids and other animals because they enjoy a lot of attention from humans or other pets.

It’s important to note, though, that this is the only rabbit breed among all rabbits in which one can expect their coat to grow outwards rather than down onto their body if left un-brushed.

This is because their fur arrangement grows as a lion’s mane rather than the shorter, more dense coat of most other breeds.

The Lionhead can also be born with floppy ears and buck teeth which are genetic traits that make them especially adorable to many people.

A crucial thing to remember when looking for a rabbit breed is to make sure that it is a breed suited for your living conditions.

Some breeds are very hardy and can live outside in all types of weather, while others are used as show animals and would be much happier indoors.

The Lionhead rabbit, being an indoor pet, prefers the company of humans more than other pets or other rabbits.

Many people have a soft spot for the Lionhead’s floppy ears and docile temperament.

When looking at rabbit breeds, the best thing to do is to find one that suits your lifestyle and personality!

The Mini Rex rabbit is the most popular breed of rabbits in North America, and they are native to Belgium. They have short ears and a large round body with dense wool that will be soft to touch.

The coloration can range from solid to mixed patterns such as black-spotted or ticked, so there’s a lot of variety for this type of breed. If you’re looking for a family pet that will get along well with children and other pets, this is the rabbit for you!

The English Lop rabbit breed is an amiable and playful type of pet. It has a calm demeanor, but it will need to be handled by an adult because its back legs are shorter than the front ones making them hard for the animal to balance on their own when they get older, usually about eight weeks old.

They can live up to around six years old. The breeds are very docile and loving, but they need to be handled with care due to their back legs being shorter than the front ones.

Despite this disability, the English Lop is an excellent breed for adults who want an animal that can come into contact with children without any worries of any harm coming to them because it is so docile.

It is a small breed of rabbit, but they come in many different varieties to help make them more fit for you.

Himalayan rabbits were first bred in England. They have a distinct coloring of white with black points, and their fur is long and silky.

These rabbits have been recognized as one of the friendliest breeds for many years. Himalayans do well around people, want to be near them at all times, and enjoy being handled.

The Himalayan rabbits are a famous bunny because they can be very friendly and docile as well. They like to cuddle up close to their owners in bed or sit on the couch next to a person’s feet.

The Flemish Giant is one of the friendliest rabbit breeds, and they are also good at being handled. They can weigh up to 20 pounds when adult!

These rabbits have a long lifespan, so if you’re looking for an animal that will live with your children until they grow old enough to care for them on its own, the Flemish Giant is perfect for you.

The Flemish Giant’s fur can be either rough or soft, and they’re known to have various colors, including white, black, reds, browns, and blue.

They also need more space than other breeds because their size requires them to move around freely in an area that they can fit in.

The Flemish Giant is the perfect breed of rabbit to have as a pet, but make sure that you are prepared for their needs by providing them with things like straw and hay-bedding so they can burrow into it.

They also need plenty of space and at least one other companion animal, maybe another bunny or dog, so they can interact with somebody else.

The Polish rabbit breed is a very old domesticated breed used in the medieval period for meat production.

They were raised on farms with open fields with grazing animals, which would act as natural pest control agents to keep the farming property free of pests such as rats.

These days they were called “Polish Rabbits,” but in the early 1900s, their name changed to “Polish Angora Rabbits” because they had been trimmed with angora wool.

Once again, studies have shown that the friendliest rabbit breed is the Netherland Dwarf rabbit.

There are also several other rabbit breeds that are known to be very friendly, such as the dwarf hotot, Holland Lop, lionhead, and the other breeds listed above.

So, if you’ve ever wanted to know about what is the friendliest rabbit breed, we hope you have the answer now.

What is The Lifespan Of A Rabbit In Captivity?

Why Does My Bunny Sleep Next To Me?