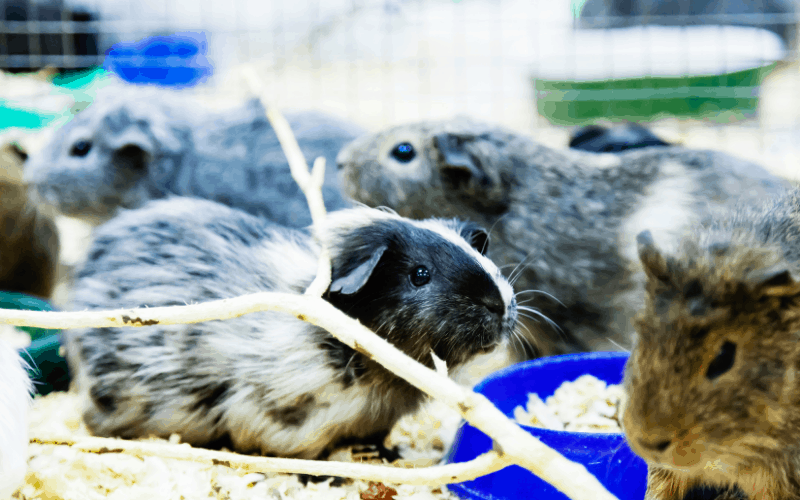 A good number of my readers have been reaching out to me lately, bothered about why their guinea pig is not eating hay, even when it’s the type of hay they’ve been buying for a while.

Table of Contents: hide
1) Why Is My Guinea Pig Not Eating Hay?
2) How To Know a Good Hay For Guinea Pigs
3) Look for Different Brands or Different Varieties
4) How to Encourage Your Guinea Pigs to Eat Hay
5) Conclusion

Good enough, this is not something to be worried about or scared of because it might be far from a medical condition; this might be a problem with the hay.

Now, if you’re ever worried that your guinea pig is not eating hay, stick around as we discuss the possible reasons and a solution.

Why Is My Guinea Pig Not Eating Hay?

As I stated earlier, the reason why your guinea pig is not eating hay might not necessarily be a medical condition, the problem might be with the hay, or they might be bored with the menu selection.

Guinea pigs have far more improved and sensitive palates compared to humans and this one factor that humans don’t regard in guinea pigs. Common, let’s be sincere about these; we humans are at a considerable disadvantage when it comes to hay.

We can presume by just seeing, smelling, and touching, but we’re missing the most vital sensory judgment: taste.

A bag of hay that might be soft, green, dry, and clean might not taste good, it might just be entirely tasteless, or it might have a taste that doesn’t go down well with your guinea.

And you probably won’t know the taste of it until you buy it and give it to your pigs.

Mother Nature has a total charge over the taste of hay, and she can throw farmers a full season of blessings, an entire season of nothing good at all, or a mixed bag of both in a single season.

The kind of weather we have in a “normal” season gives us many variables, and the crazy weather we’ve seen in recent years increases the variables exponentially.

Mother Nature being anonymous enough, might present to us a good hay harvest. Still, all the variables that went into a harvest might have created a taste your guinea pig despises.

Some guinea pig owners have had the experience of where their pigs liked hay that the rescue pigs didn’t like and vice versa.

The two groups of pigs have turned up their noses at hay that rabbits and chinchillas in area rescues loved.

It is always not the fault of mother nature when there is terrible hay because they may create excellent conditions for hay, but something else in the process went wrong. Maybe the hay was cut too soon or too late.

Another factor might be mistakes in storage, problems in distribution/transit. If producing bad hay is due to operational errors, good companies will try to make things right if you complain.

How To Know a Good Hay For Guinea Pigs

Qualities of good hay that is recommended should include green, dry, non-dusty, and soft. Any hay that is yellow (old hay is yellow or beige), or moldy, damp, or wet (or that has been wet recently) should be considered not good.

Undoubtedly good hay smells fresh like it just came in from a sunny field; it should not smell moldy, wet, old, or musty.

Another quality of good hay is soft, not full of stems and stalks. Any hay that is “Stalky” or “crunchy” can cause an injury inside the mouth of a guinea pig, an injury that almost always leads to infection and too often requires surgery to clean up.

Always sought out for hay that is labeled “second cut” or “third cut” to ensure the softest possible hay.

If you have someone that owns a horse or works with horses, plead with them to give you some help with the “smell test” on hay.

Such people are very good at sniffing out good and bad hay and often can pick up on the same nuances in the smell that their animals can.

Honestly, so many people feel that the best hay can be found in big box stores. But most times, you see bags of yellow or brown hay on their shelves that should be pulled or should never have been put there in the first place.

Most of the type of hay called green timothy hay is “first cut” hay that is the crunchy and stalky variety that rabbits prefer, but that guinea pigs won’t pick if they have a choice.

When you go to smaller independent pet or pet supply stores, you will notice that you start finding an enormous variety of brands, like Oxbow, Zupreem, and Sweet Meadow Farm.

With some stores that are independent, you often can work with the owners to special-order specific brands or bulk sizes (25 pounds or more) as part of their usual weekly deliveries (thus saving you the high UPS Ground or FedEx Ground costs).

Choosing the perfect hay for your guinea pig requires work; you may have to brace yourself for some trial and error until you find hay that your guinea pig-like.

If you know someone that owns a guinea pig who eats hay, it might be worth having a sharing/swapping circle in which to pass along otherwise good hay that, for whatever reason, your pets just didn’t like. And, having that in check, your local rescues would welcome the donation of hay (for which you could claim a tax deduction).

So, you as a guinea pig owner, what is up with you? What do you know about these isolated incidents I’ve heard about recently, or are they part of a larger problem with the hay harvests last fall? Have your guinea pigs stop taking hay or still eating it as usual?

Rabbits and some guinea pigs are popularly known to be stubborn, especially when it comes to their food. Listed below are a few essential tips and tricks to try and encourage them to eat more of what is good for them!

How to Encourage Your Guinea Pigs to Eat Hay Haven discussed the possible reasons why your guinea pig is not eating hay and how to choose good hay for your piggies, let’s now discuss the various ways you can encourage your guinea pigs to eat hay.

As the last option, offer Lucerne Hay. This and clover hays are higher in protein and are more palatable than grass hay.

However, they should not be given long-term as they are high in calcium that can be a major cause of a range of problems, including urinary stone formation in adult rabbits and guinea pigs.

Note: Oaten and Grass Hay are the fundamental sources of fiber in a rabbit or guinea pig’s diet; feed it more often, which means you always have plenty of fresh, good quality hay available for your pet.

Hay that is of low-quality straw, has very little nutritional value; however, it can be used for a bed.

I always try as much as possible to answer questions coming from my readers to the best of my knowledge and, most times, go the extra mile to do researches and consult experts.

Why is my guinea pig not eating hay wasn’t left out; this article gave out all the possible points that might lead to such a situation and reassured my readers not to panic because it is necessarily not a medical condition.

I hope you enjoyed today’s article, and I look forward to seeing your feedback!

Can Guinea Pigs Have Play Dates?