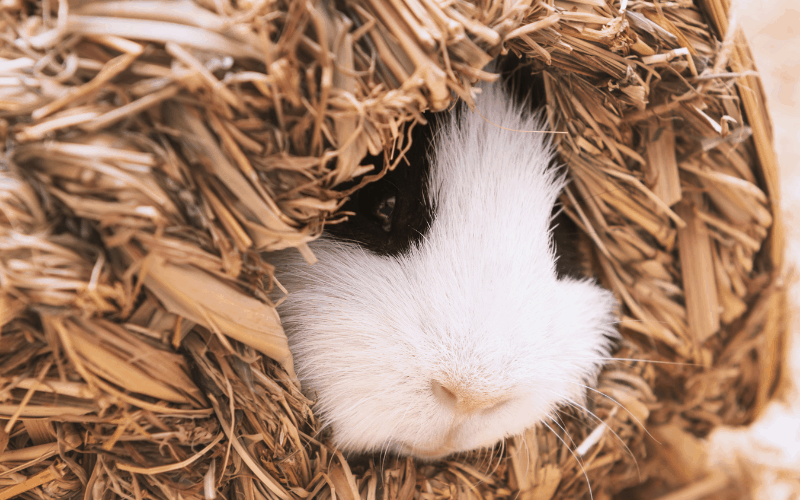 Guinea pigs are crepuscular creatures, which means that they are most active during dawn and dusk.

Some people find it hard to tell how often guinea pigs fall asleep and many people usually think that they don’t sleep at all. However, guinea pigs do sleep but do so in short bursts throughout the day and night, and you may find them sleeping without shutting their eyes.

But exactly how often do guinea pigs sleep? Guinea pigs can sleep up to 4 hours but it is divided into an average of 24 short naps about 10-minutes long throughout the day and night.

How Often Do Guinea Pigs Sleep?

Most animals are either nocturnal or diurnal meaning they either sleep during the night or the day. But you can say guinea pigs are the weird ones (just kidding! They are sweet little munchkins).

Guinea pigs are popular creatures of prey in the wild and they are not very fast, so they have to look for another method of self-defense. Their method of sleeping actually comes in handy for this and this enables them to stay on the alert and take cover at the first sign of trouble.

Guinea pigs are crepuscular animals that are most active during dusk and dawn. Guinea pigs are usually more active in the day but still take short naps during the day.

So they are not 100% diurnal nor nocturnal animals. But you may notice that they sleep more at night and this is because they get used to their owner’s schedule.

This is also because guinea pigs do not like a lot of the sun, and they feel unsafe in total dark, making dusk and dawn the best part of the day for guinea pigs.

This means that guinea pigs are not usually loud at night but they can also make communication sound with each other.

So if you happen to hear your guinea pig making loud sounds at night, that can be a sign that something is wrong, so you need to ensure that a good place is provided for your guinea pig to sleep and they have adequate water and food in their cage.

Read Also: How To Know When a Guinea Pig Is Happy

How Long Do Guinea Pig Sleep? During a 24-hour period, a guinea pig sleep in what consists of short naps. You may not even notice them sleeping as they are able to sleep with their eyes opened. A guinea pig can sleep up to 12 hours per day.

Guinea pigs have short naps that usually last around 6 to 10 minutes and they sleep the most during the night, sometimes a guinea pig might have sleeping intervals that can last up to 30 minutes.

These are usually very rare and occurs when your guinea pig is relaxed or extremely sleepy. Younger guinea pigs tend to have short sleep intervals compared to older ones. When a guinea pig gets older they tend to spend most of their day sleeping.

This might as a result of an adjustment to your routine or weakness that comes with aging. Guinea pigs have different stages of sleep and they all have their different importance to a guinea pig’s overall health.

One especially interesting sleep stage is called rem sleep (rapid eye movement), this is the stage that guinea pigs can dream.

Guinea pigs can sleep in the same position as when they are awake just with their heads leaning forward a bit. However, they still remain alert and can wake up really fast when startled by any kind of noise or movement.

So, when you notice your guinea pig sleeping with its eyes closed that is a sign that it is relaxed and comfortable with you and its cage.

How To Tell If Your Guinea Pig Is Sleeping Or Not If you notice your guinea pigs standing entirely still, they are likely taking a nap. You can also find them laying down with their heads down, lying on their side, or tucked inside their hiding places. This tells you that your guinea pig is taking a nap.

Although all these are ways to tell if your guinea pig is taking a nap or not, your guess might not always be true. They might be fully awake even when in those “napping positions”.

Guinea pigs are very active animals, and usually spend most of their time, moving around, chewing on hay, toys, or even their cage bars, or just playing with their partners if you have more than one guinea pig.

But your guinea can take on those sleeping positions or hideaway for hours without coming out if they are especially new to the enclosure.

Can Guinea Pig Sleep In My Bed?

If you are a pet owner who loves sharing their sleeping space with their pet and you are wondering if a guinea pig can sleep in your bed, well, the answer is yes. Your guinea pig can share your bed but it usually isn’t recommended. Here are a few reasons why.

Guinea pigs pee and poop several times in just a few hours. So, even with a potty-trained guinea pig, you might still end up with poop and pep in your bed and even all over you as well.

Another reason it isn’t recommended to share your bed with a guinea pig is safety. Many people move around while they are asleep, this might cause you to hurt or even squish your guinea pigs without even knowing. This can be very fatal to your pet.

Furthermore, guinea pigs tend to be more active during the night which means they may need to eat and carry out other activities at night time.

Therefore, placing your guinea pig in your bed at night time will disable them from getting access to their food and water, which might cause them to make a lot of noises, which will disturb your sleep.

The last but not least reason you shouldn’t sleep with your guinea pig is concern about the allergies and diseases they carry. Guinea pigs are not hypoallergenic animals so they carry some allergens and illnesses, which can be harmful to humans.

Factors That May Affect Your Guinea Pig’s Ability To Sleep Sometimes you might notice that your guinea pigs aren’t receiving enough sleep and are awake most of the time. Here are some factors that might affect your guinea pig’s ability to sleep.

To ensure your guinea pig has a good night’s sleep, you need to ensure that they are provided with the right beddings.

Many people create bedding for a guinea pig out of any material they can lay their hands on. This often leads to them using inappropriate bedding materials like pine bedding, cedar bedding, etc. Which is extremely uncomfortable for a guinea pig and prevents them from taking a much-needed nap.

You need to ensure that the bedding for your guinea pig is soft, moist-free, and of high-quality.

Guinea pigs are prey animals and even if they have been domesticated, they still have their survival instincts and they still come into play in a guinea pig’s life.

So when they feel unsafe in an environment, they will find it hard to sleep. Guinea pigs are at the bottom level of creatures in the food cycle. They are usually surrounded by predators, so before they are able to take a nap, they need to feel a bit of security first.

You can do this by providing your guinea pigs with a functional hiding space that can be covered with some hay. Your guinea pigs will be able to burrow in and take a snooze whenever they want.

This is another possible reason why your guinea pigs aren’t able to sleep. No one can sleep on an empty stomach neither can guinea pigs.

Try to serve your guinea pig some vegetables a few hours before their bedtime and before going to sleep ensure to put away the leftover vegetables and place lots of hay and enough water in their enclosure so that they have something to chew on if they happen to wake up at night.

4. Temperature of an enclosure

The temperature in your guinea pigs’ enclosure also needs to be at a comfortable range so that they can sleep well.

It is recommended that you maintain the environment around their enclosure at this particular temperature range so that they can get a good night’s sleep.

You can also attach fans to the sides of the cage and so that it provides a cool breeze and ensure that the temperature doesn’t get too high for your guinea pigs.

Your guinea pig’s cage should also not be placed in an area where the temperature changes very rapidly.

Guinea pigs don’t respond very well to rapid temperature change and it could make them feel uneasy and even disturb their sleep schedule.

But hopefully, this article has helped you to understand everything related to the guinea pig’s sleep pattern better.

Can You Bathe A Guinea Pig With Baby Shampoo?