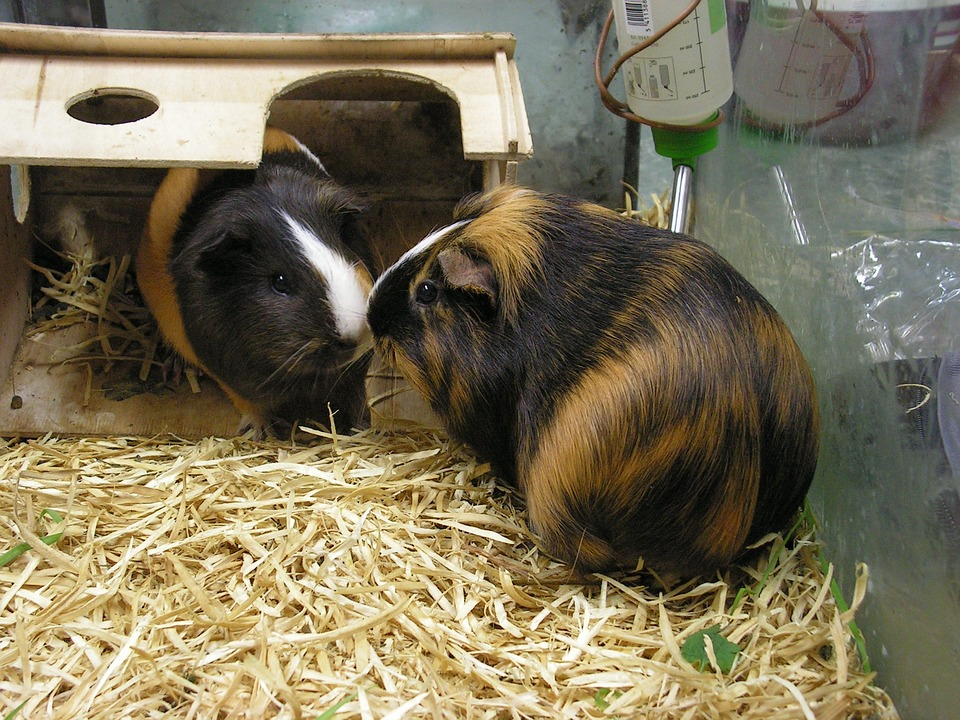 When discussing the similarities between male vs female guinea pigs, these are on top of the world when happy. They, however, differ in their habits, appearance, and behavior. Male guinea pigs tend to live in groups in the wild, but keeping male species in one enclosure at home may not be wise.

How Do I Know if my Guinea Pig is a Male or a Female?

Determining the gender of your pet guinea pigs is not rocket science. All you have to examine is their genital area. To do so, lay the pigs on their backs, but do so quickly, as the guinea pigs may feel threatened if they are laid for an extended period of time.
Male guinea pigs have a small, circular dot that is slightly raised.

It is often referred to as an ‘i’ or an inverted exclamation mark. In contrast, the female counterparts have a Y-shaped genital area. If still unsure, you can always take the help of your vet.

Can Male and Female Guinea Pigs be Housed Together?

When housing the male and female guinea pigs together, one should ensure a balance to keep them happy and lively. These are social animals and love to be together and enjoy groupings. There is no specified rule for their housing, but keeping them in adequate space and busy with activity will help avoid their aggressiveness.

There is an insignificant difference in size between male and female guinea pigs. They are almost the same length as adults. Male vs female guinea pigs are both known to have approximately 8 to 12 inches long body size. However, the length may vary in different species of guineas.

As far as weight is concerned, male guinea pigs weigh more than their female counterparts. Males may weigh around two and a half pounds, whereas females may weigh roughly two and a quarter pounds.

When one adopts a pet, one requires affection from the pet. There is no difference in how much a male or female guinea pig loves you, but you can teach a pet to love you. If the pup has been cared for since birth, it trusts its owner and is happier and more affectionate.

Certain studies also state that males are more affectionate than the opposing gender. One reason that comes here is that males tend to bond earlier. As a result, they become more loving toward one another.

Both genders eat leafy vegetables such as spinach, lettuce, etc. Guineas also love to have hay. Males are known to be heavier or bulkier; they may require more diet than females. But if a female guinea is pregnant, she may need more nutrition to fulfill her body’s needs during pregnancy and after delivering the litter to feed them.

Female guinea pigs are often low on blood calcium levels if they reproduce large offspring or more than four litters. It could lead to pregnancy toxemia in them. It is therefore encouraged to provide them with a calcium-rich diet. A particular supplementary diet is also possible, such as raspberry leaves. These are beneficial for guineas who have delivered recently.

In the general comparison of male vs female guinea pigs, both do not smell bad. The odors may come only when your pocket pet is sick. Another reason for the smell may be from the fecal pouch, which contains whitish grease and glitter particles.

This white lubricant has an unpleasant odor, and you may feel it when it opens. Under normal circumstances, males tend to keep the pouch closed; hence no smell is produced. The males maintain the hygiene of this pocket by themselves.

In comparison, females tend to open this pouch wider, especially when trying to breed. The opening of the fecal pocket may accompany some rumbling and rattling, which gives an alarm.

Male vs Female Guinea Pigs: When to Separate Them

The baby guinea pigs should be separated from their mothers and another gender after three to four weeks. It is necessary to avoid unnecessary and premature pregnancies in guinea pigs.

To neuter male guinea pigs, one has to wait for at least four weeks; therefore, the chances of pregnancies increase by that time.

One more thing that has to be noticed is that male guinea pigs tend to stand upright on their back limbs to practice mounting a female guinea pig. If you see this act of your male guinea, it is high time to separate them from their female counterparts to prevent unwanted mating and reproduction.

When adopting a guinea pig for the first time, one weighs the advantages and disadvantages of male vs female guinea pigs. What is more important to consider is how you intend to pair them.

Male guinea pigs are just as happy in their cage as female guinea pigs. It is crucial to know a guinea pig’s gender in order to organize social groups and control reproduction.

Do you need clarification on whether you should buy one or adopt a guinea from a rescue center? Guinea pigs are prolific breeders, so thousands of guineas require shelter regularly. It is better to adopt one from a reputable store or a professional breeder.

These breeders take good care of them and help prevent their aggressive nature. Visit ownyourpet to learn more.