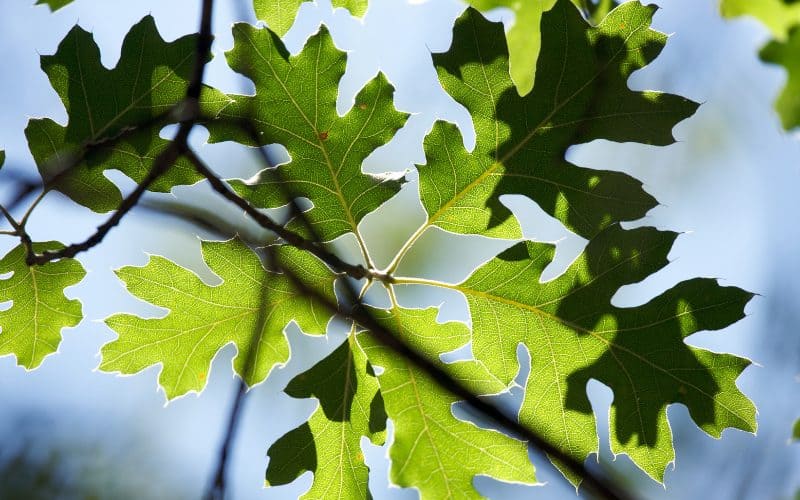 As a pet owner, you should know what your pet can safely eat or not because you would not want to give toxic materials to them. Guinea pigs are unique kinds of animals. You cannot just feed them with just about anything because some foods you think are okay for other animals may be poisonous to them.

Again, guinea pigs are quite choosey about what they eat. They will most likely reject any unfamiliar food and stay hungry, and starving would stress them a lot. Guinea pigs are mainly herbivores, possessing molar teeth that can appropriately grind plant matter like leaves and grasses.

But can guinea pigs eat oak leaves? Well, it’s not advisable to feed your cavies with oak leaves due to its poisonous nature. We’ll find out more about oak leaves below.

What are Oak Leaves?

Oak leaves come from the ancient oak tree. There are many oak varieties in the United States, over 40 of them. There is at least one particular variety in every state. The oak trees are considered everlasting because of how long they live. We highly suggest you don’t give your guinea pigs oak leaves to eat. While some people argue that a small number of oak leaves do not harm guinea pigs, we politely disagree with that because oak leaves are poisonous in whatever quantity. Not just to guinea pigs but other livestock like cattle, sheep, goat, and even rabbits.

Oak leaves from short oak trees are the most toxic, and Quercus havardii is the deadliest oak species. It is not safe for livestock to consume them.

Mascal, an academic, first noted the toxicity of oaks to livestock in the year 1662. Livestock farmers did not know how deadly the oaks were then. Cornevin stated it again in his publication in the year 1893.

Many of these claims were suspicions and not backed by scientific evidence in those times. At the end of the 19th and 20th, many scientific works came out to prove beyond a reasonable doubt that the oak leaves and anything from oak were dangerous to guinea pigs.

Guinea pigs, like most animals, have an uncanny sense of smell. They are quite picky about what they eat. They usually smell whatever they are having before putting them in their mouth. They know whether to eat something or not. But this insight is not innate. It is built on a learned system.

Left in the wild, older animals teach the guinea pigs what to eat and what not to eat, but you are responsible for their food safety when you domesticate them. Sometimes, domesticated guinea pigs mistakenly take up these oak leaves during foraging, which will have a detrimental effect on their digestive system.

The digestive system of guinea pigs is very sensitive. They cannot digest any food that has salt, fat, and sugar. They cannot also digest oak leaves.

There are many dangerous things for guinea pigs to eat like dairy products, sweets, and meat. Guinea pigs are predominantly herbivores, meaning they eat plants more. It would be best if you were careful when giving them anything that is not plant-based.

Even though guinea pigs are herbivores and eat lots of vegetables, not all vegetables are right to be given to them. Again, there are foods that guinea pigs require only in small quantities. If you give them those in excess, you will cause them severe health issues.

The oak leaf is one of the vegetables that should not even feature in guinea pigs’ meals because they lead to a condition known as Oak poisoning.

Oak poisoning can be a massive problem in livestock farming, especially in places where oaks are planted. Many oak parts are toxic: the leaves, the acorns, the buds, and the blossoms.

Oak poisoning signs show between eight to fourteen days after your guinea pigs have ingested the oak leaves.

Loss of Appetite and Listlessness

The first sign is appetite loss and listlessness. You will notice that your guinea pigs are no longer active as before. They would rather crouch at a corner instead of being active as usual.

The second obvious sign that oak leaves have poisoned your guinea pigs is their hair coat. They become rough. The animals, on the other hand, begin to look haggard. This is because the poison is having a toll on their digestive system.

If you still do not take note, severe constipation sets in eight days after the guinea pigs have eaten the plant. Bouts of severe diarrhea follow this. The excreta will contain blood and mucus.

Poisoned animals are usually drawn to water. They tend to stay near the water and drink frequently, but they only take a little water on each occasion.

The guinea pigs could become anemic, and loss of weight may become apparent.

Another sign of oak poisoning is nasal discharge. This discharge is usually frequent and has blood in it.

The abdomen of the guinea pig is distended because of ascites.

Females can lose their pregnancy if they ingest oak leaves, but this not very common.

Dehydration Due to Constant Urination

Constant urination is one of the signs of oak poisoning. The body system of the guinea pig tries to remove as much of the toxins as possible. This constant removal of waste from the body can cause dehydration.

In severe cases, especially among young guinea pigs, death may occur after they suffer a bout of illness for 24 hours.

What Do You Do When Your Guinea Pigs Eat Oak Leaves?

There are a few things you can do when you suspect that your pets have eaten oak leaves. Here there are:

Once again, can guinea pigs eat oak leaves? The answer is a firm no.

If you discover the disease early, total recovery from oak poisoning can occur in the space of 60 days. If you find out the condition late, it could end in kidney failure or, worse, death. The adage still holds, ‘Prevention is better than cure.’

You should keep oak leaves away from where your guinea pigs graze as oak poisoning can have debilitating effects on them. Knowing that guinea pigs have such a sensitive digestive system, it is imperative that you watch what they eat closely.

Do not experiment with your pets’ food. Stick to what they are familiar with and what has been proven to be safe. Unfamiliar foods will put off the guinea pigs.

How Much Coriander Can Guinea Pigs Eat?